Celebrating 75 Years of Service and Planning for the Next 75

Established on November 17, 1944 by a vote of the people, the Goleta Water District celebrated its 75th Anniversary on November 13, 2019. To commemorate this milestone, a collection of the District’s photos and exhibits were digitized and a selection of items are shared here. Many of these images have not been seen in decades, and the collection spans the District’s history, including the construction of the facilities at Lake Cachuma, the installation of many of the pipes and transmission mains we still rely on today, and the building of the Corona Del Mar Water Treatment Plant

While plenty has changed in the intervening years, much of the original infrastructure built out in the 1950s and 60s remains in place. Continued investment to maintain and slowly replace this aging system will ensure ongoing service reliability for customers.

In the midst of WWII, Goleta Valley was battling a brutal drought that was drying up the entire South Coast.  It was becoming clear that additional water supply sources were needed to supplement local water.  At the time, no official agency represented the Goleta Valley in the debate concerning the development of Lake Cachuma on the Santa Ynez River.  The District was founded on November 17, 1944 by a vote of the people to represent the water interests of the Goleta Valley. 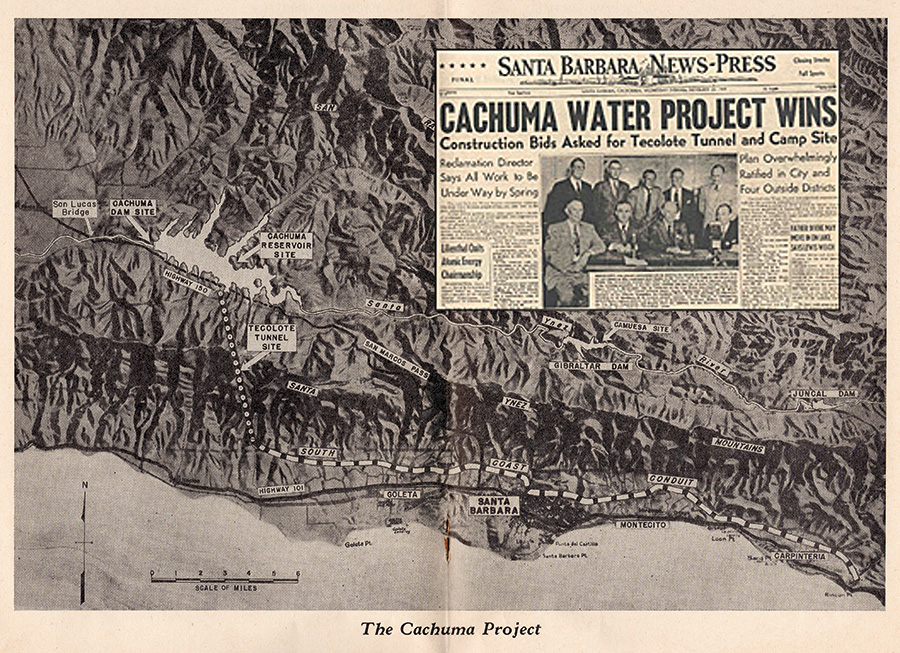 Goleta residents joined other County citizens voting to approve the Cachuma project by a 3-to-1 margin.  Construction began in 1950 and was completed in the mid-1950s. The Tecolote Tunnel, a seven-foot diameter, six-mile-long gravity-fed water conveyance pipeline, bored straight through the Santa Ynez Mountains delivers water to the South Coast. 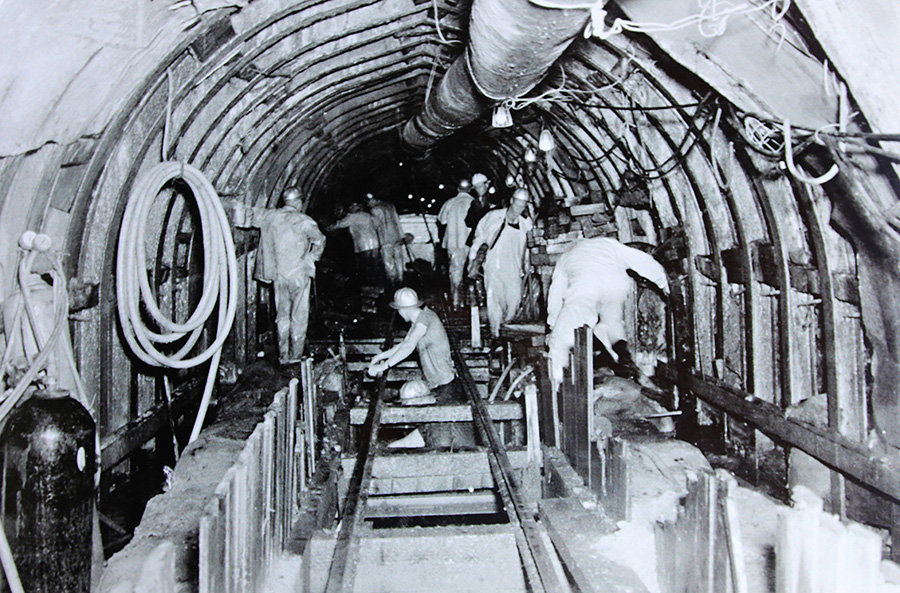 The Tunnel required years of work and earned its reputation as a “snarling vicious tiger.”  Work was repeatedly stopped by massive flooding in the tunnel, extreme temperatures, dangerous levels of toxic gas, explosions and hard rock that crushed support beams. 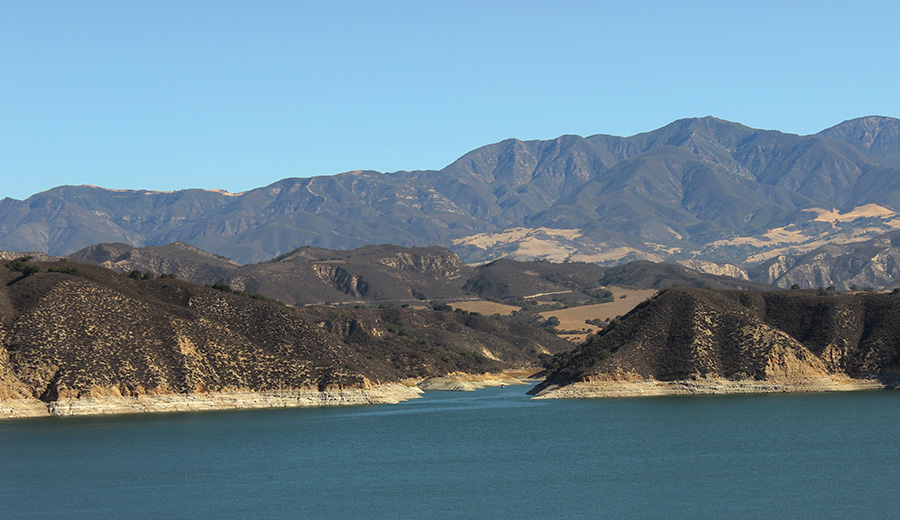 Most of the basic water infrastructure in the Goleta Valley was built in the 1950s and ‘60s.  Including much of the over 270 miles of water pipelines that the District maintains today. 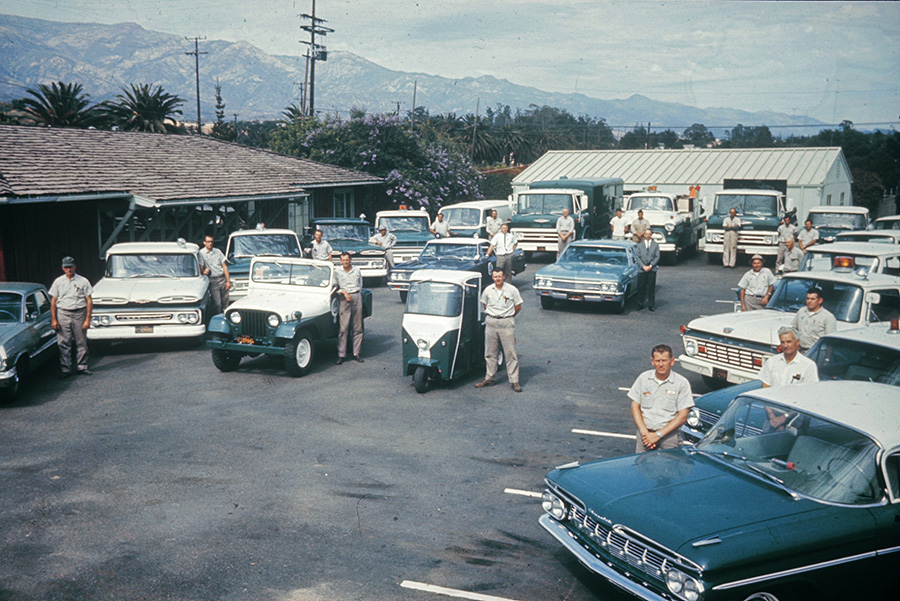 District staff with a fleet of vehicles at the District headquarters located on Hollister Avenue and Puente Drive, 1967. 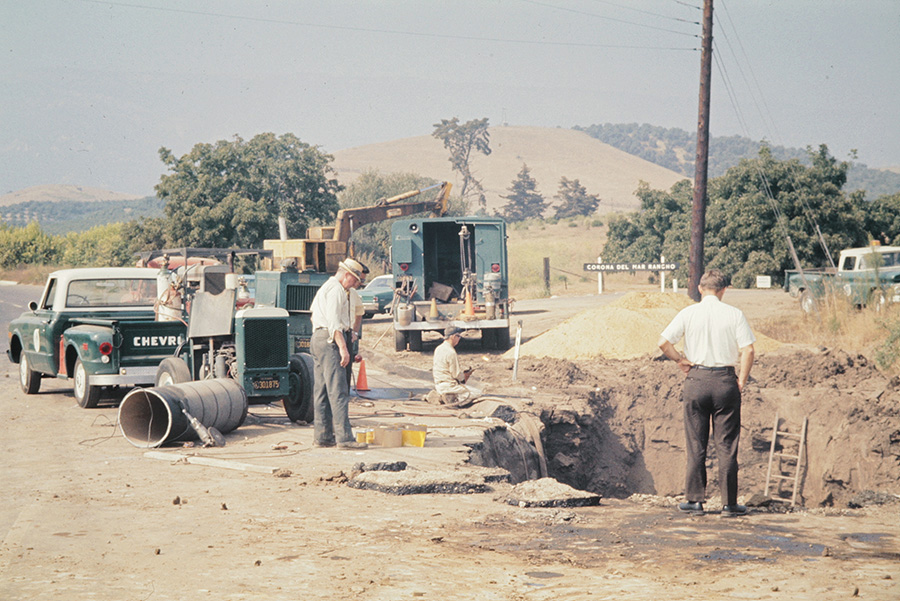 The Goleta Groundwater Basin plays a critical role in the District’s water supply portfolio, especially during periods of drought.  Most of the District wells were drilled in the 1970s, and are approaching 50 years old, which is the estimated useful life for a groundwater production well.  Under normal conditions, the District has a court-determined right to pump 2,350 acre feet per year, and the District can store water in a drought buffer for use during dry periods. With recent rehabilitation work completed in 2016 the wells can currently produce 6,000 acre feet per year, enough to meet the minimum health and safety needs of the community. 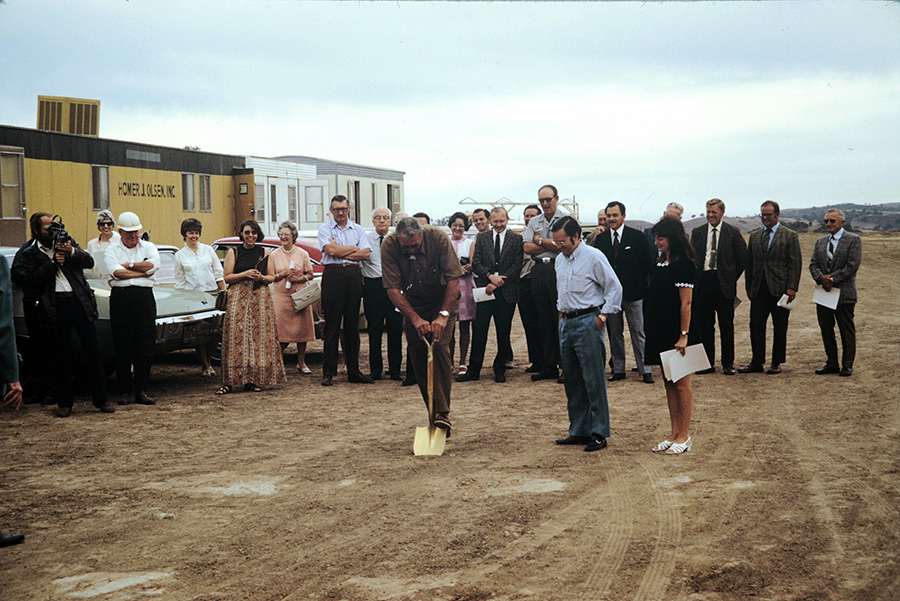 In 1973 the District broke ground on the Corona Del Mar Water Treatment Plant (CDMWTP). The plant is located in the Goleta foothills and treats water delivered through Lake Cachuma. The CDMTP uses a gravity feed system to deliver treated water to District customers, which is extremely energy efficient. 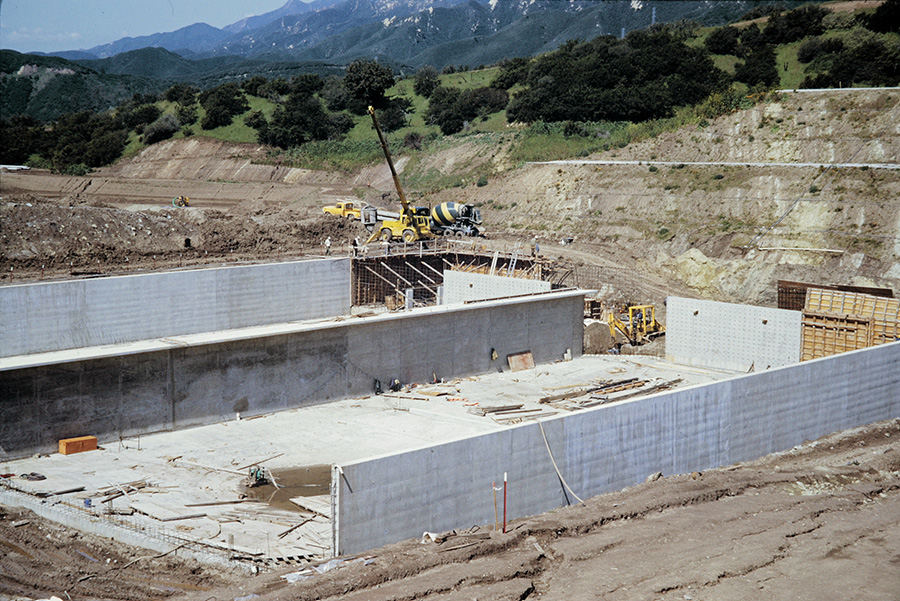 Construction of the sediment and flocculation ponds at the CDMWTP, 1973.

Even the most innovative conservation programs could not balance water supply and demand during the epic drought that struck in the late 1980s and early 1990s. Goleta Water District in partnership with Goleta Sanitary District began a project to recycle waste water, and deliver the recycled water to District commercial irrigation customers. In addition, voters approved the State Water pipeline, and the Safe Water Supplies Ordinance (SAFE), which has had a lasting impact on the health and sustainability of the groundwater basin. 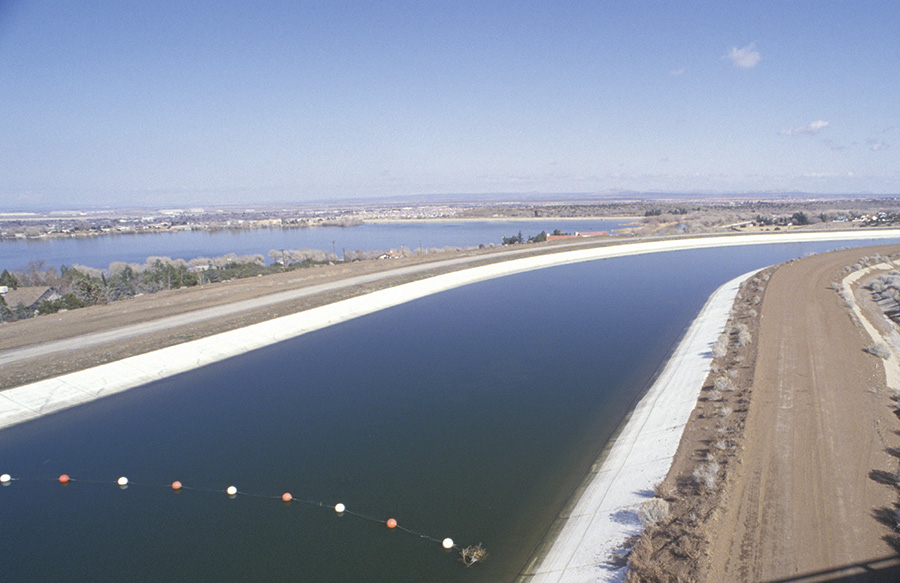 The State Water Project brings imported water down through Lake Cachuma to the South Coast.

The State Water Project depends on a complex system of dams, reservoirs, power plants, pumping plants, canals, and aqueducts to deliver water from rivers in Northern California. The District is entitled to up to 7,450 AF of water per year, and during drought, imported water accounts for about 1/3 of the District’s water supply portfolio.

Today, the District has invested in, developed, and maintains a diverse water supply portfolio that meets the water supply needs of the Goleta Valley now and into the future. Supply sources include Lake Cachuma, groundwater, recycled water, and imported water from the State Water Project. Delivering water from these four supply sources has required significant expansion of the District’s distribution system and pumping capacity to move water throughout the system, including to higher elevations. In response to the current drought, and to deal with changing water quality conditions at the lake, the District anticipates having to increasingly rely on the combined use of surface and groundwater. This involves more complex mechanical equipment, and places operational demands on the system. Even maintaining access to current water supply sources requires ongoing investment in the infrastructure necessary to access it. Continued investment in our water treatment and distribution infrastructure is vital to providing our customers with safe and reliable water supplies while planning for the next 75 years.