75 Years of Service - The History Of The Goleta Water District 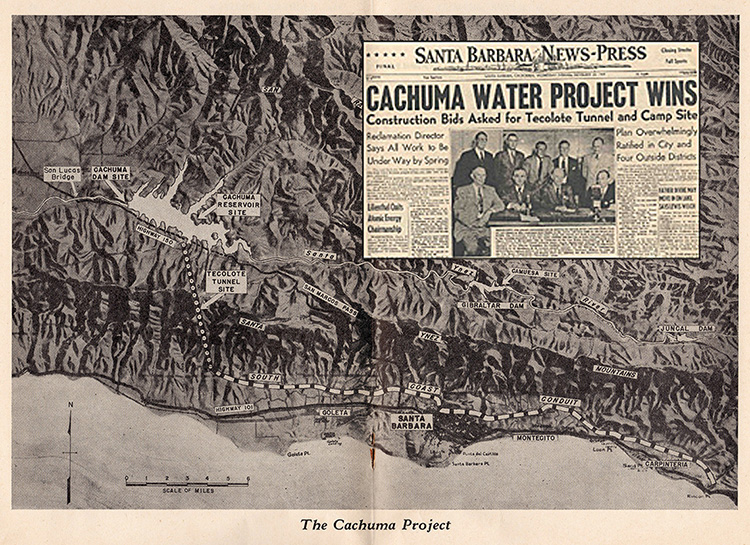 The Goleta Water District is a political subdivision of the State of California organized under Division 12 of the California Water Code. It was formed by a vote of the people in the District on November 17, 1944.

One of the original purposes for the formation of the District was to establish a legal entity representing the Goleta Valley area together with the City of Santa Barbara and Montecito, Summerland, Carpinteria, and Santa Ynez Water Districts. As a group, these organizations could enter into contracts with the Santa Barbara County Water Agency and the U.S. Bureau of Reclamation for a supply of water and repayment of the costs of construction of the Cachuma Project on the Santa Ynez River. This project was constructed to conserve waters of the Santa Ynez River for use in the Santa Ynez Valley and the South Coast area of Santa Barbara County. The initial water service from the Cachuma Project to the South Coast began in 1956.

In the midst of WWII, Goleta Valley was battling with Mother Nature over water supplies. It was becoming clear that additional water supply sources were needed to supplement local water. At the time, no official agency represented the Goleta Valley in the debate concerning the development of Lake Cachuma on the Santa Ynez River. Goleta Water District was formed in 1944 to represent the water interests of the Goleta Valley.

By the late 1940s, a brutal drought was drying up the entire South Coast. With water demand exceeding supplies, Goleta residents joined other County citizens voting to approve the Cachuma project by a 3-to-1 margin.

The Tunnel required years of work and earned its reputation as a “snarling vicious tiger.” Work was repeatedly stopped by massive flooding in the tunnel, extreme temperatures, dangerous levels of toxic gas, explosions and hard rock that crushed support beams. Despite delays, worker injuries, and soaring costs, the job was completed in 1952.

Most of the basic water infrastructure in the Goleta Valley was built in the 1950s and ‘60s. Including much of the over 270 miles of water pipelines that the District maintains today.

By the 1960s and ‘70s, the Goleta Valley was growing rapidly, and the water supply dipped below projected demand. In 1972, Goleta Water District halted new water connections, stopping new construction in the Goleta Valley.

By 1983, the moratorium was eased to allow some new development using water saved through customer conservation and the conversion of some agricultural land.

Even the most innovative conservation programs could not balance water supply and demand during the epic drought that struck in the late 1980s and early 1990s. Fortunately, abundant rainfall in the winter of 1992 led to swollen reservoirs and the end of the drought after six consecutive extremely dry years.

In the early 1990s, the South Coast was gripped in the last stages of a severe seven-year drought. Lake Cachuma was drained to its lowest level ever, mandatory conservation measures were imposed, water rates were raised, and groundwater pumping was stepped up.

Additionally, Goleta Water District in partnership with Goleta Sanitary District began a project to recycle waste water, and deliver the recycled water to District commercial irrigation customers. In addition, voters approved the State Water pipeline, and the Safe Water Supplies Ordinance (SAFE), which has had a lasting impact on the health and sustainability of the groundwater basin.

Today, the District has invested in, developed, and maintains a diverse water supply portfolio that meets the water supply needs of the Goleta Valley now and into the future. Supply sources include Lake Cachuma, groundwater, recycled water, and imported water from the State Water Project.

Continued investment in our water treatment and distribution infrastructure is vital to providing our customers with safe and reliable water supplies for another 75 years and beyond.